My first recollection of this realisation takes me back to a primary school class full of children seated behind tiny desks, arranged in a horseshoe pattern. We were busy with a reading lesson, and I was scared and felt helpless.

Everybody read in turn, down the row. It was almost my turn; two more to go. I looked at my watch, hoping that I would be ‘saved by the bell’. I knew that the boy whose turn it was spoke very slowly. His turn always lasted a bit longer. Ten minutes remained of the period – maybe I could still make it.

But on that day the teacher cut the slow boy short. ‘Mary’, she called, and the girl next to me started reading with a clear voice. My heartbeat quickened and my hands became sticky. I fought against the impulse to leap from the desk and run out of the classroom. I considered raising my hand to ask permission to go to the toilet, but decided against it. It was an excuse to be used sparingly, in case somebody became suspicious.

Inevitably my turn came. The teacher called my name and I froze. I knew I had a few precious seconds left until I had to read. In a perverse way I almost enjoyed these last moments of freedom and anonymity, which contrasted so sharply with what was to follow. But I dared not hesitate too long. Some of the children would otherwise look up irritated, wondering what was going on. Then they would see who was causing the delay, and they would think: Oh, it’s him again.

So I began to read. To my surprise the first few words didn’t sound that bad at all. It flashed through my mind that this was a good start and that I should just carry on like this - maybe it would be all right this time. The words came out jerkily, shakingly, but I carried on, clinging to the hope that the teacher would soon stop me or that the bell would ring. I reached the end of the first sentence, hurriedly scanning the letters and words in the next sentence: there were a few difficult ones, but I thought I would be able to pass them quickly. Then I froze: the word ‘day’, always a very difficult one for me, appeared close to the end. I continued ineptly, as slowly as possible, frantically hoping that the bell would ring in time.

On the word ‘day’, however, I stopped dead in my tracks, completely unable to pronounce the ‘d’ . I repeatedly pressed my tongue against my teeth, but to no avail. A deathly silence crept over the class. I sat as if nailed to my desk. I felt my cheeks reddening and my shirt stuck to the back of the seat. The class became restless. I could feel their eyes on me. Finally I made a last effort. An incomprehensible sound escaped my lips, but I had at least broken that terrible silence.

What was to follow, however, became a nightmare. Every word towered insurmountably in front of me. I struggled and sputtered through the words, wondering when this would end and why the teacher allowed this to continue. I dared not look up, but could hear whispering in the class and some giggling, and got the impression that Mary, the girl next to me, felt uncomfortable about sitting close to me.

At long last the teacher, apparently quite unaware of my ordeal, called on the next pupil to continue. I didn’t hear a word of what he read. My heart was beating in my forehead, and I wanted the earth to swallow me. Suddenly the bell rang. In my state of anxiety I jumped with fright, the shrill sound cutting through my head like a knife. As the class packed away their books I tried to regain my composure, fighting back overwhelming feelings of embarrassment, bewilderment and fear. What was wrong with me? I was able to speak reasonably well, though not perfectly, to my friends and my parents – why did my speech break down completely on the occasions when I needed it most?

These questions continued to haunt me through much of my later life. However, I soon came to know that there was a word for the affliction which was causing me so much misery. It was called stuttering.

At a later stage of my life I became intensely interested in the phenomenon of stuttering. I read all the relevant books I could lay my hands on, and found to my surprise that my increased knowledge and awareness helped me in managing my speech better. From this realisation grew another: that WRITING about the problem helped to exorcise the fears and stresses which had become part of my stuttering.

In the eighties I was also very fortunate to attend an excellent workshop for people who stutter (PWS). I completed the two-year follow-up course and became involved with self-help groups for PWSs.

This book is the product of those years. I am not a speech therapist, and this is not a scientific manual. I have tried, to the best of my ability, to make sense of the bewildering mass of existing views of stuttering, and have emphasised those approaches which I have found particularly useful. I have done this to inform and help those who desperately seek relief from this neglected and underestimated speech and communication disorder as well as their teachers, family members and friends – in short, everybody seeking information about stuttering.

One of the points of departure of the book is that more information about the disorder in itself already represents the first step on the road to improvement and control. Following the approach of self-help groups all over the world, the adult who stutters is encouraged to become an informed and critical client, to acquire more information about the different treatments and to accept co-responsibility for his speech. The person who stutters should in effect become his/her own therapist.

Stuttering is a subtle and very personal defect. For this reason several chapters are included in which PWSs discuss their experiences. My own experiences as a PWS are dealt with in the first chapter and in ‘Breaking the Chain’ near the end, in which I describe how I improved. I hope that these personal accounts will cast more light on the disorder and the problems the PWS may encounter in the course of his life.

Writing this book was an intensely enriching experience and part of an ongoing process of becoming both a better speaker and human being. There is probably a set of lessons accompanying every disorder, extending further than one could ever imagine.

Today I realise that even with all the misery it caused, stuttering also had something to teach me. For the adult PWS who wishes to achieve a lasting improvement in his fluency, working on his speech may not be enough. In my case I had to re-evaluate my view of life and life skills in an attempt to lower my tension levels. I believe that this re-evaluation has not only improved my speech, but has also made me a better person.

Since the majority of people who stutter are male, the PWS will for the sake of convenience be referred to as ‘he/him’ in this book rather than ‘he/she’, ‘his/hers’, etc.

CLICK HERE, THEN SCROLL DOWN FOR NEXT CHAPTER
2 comments:

Email ThisBlogThis!Share to TwitterShare to FacebookShare to Pinterest
Older Posts Home
DISCLAIMER: Any suggestions, advice or ideas in this blog are used at the reader's own risk. The author of this blog is neither a speech therapist nor a medically qualified professional, and will not be liable for any loss, injury or damage suffered or sustained from following such suggestion, advice or ideas.

The original cover of the book 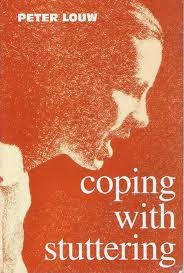 Have you seen my demonstration videos on the PA Technique?

Listen to my demonstration podcast

'Coping with Stuttering' was published as a book in 1996 in Johannesburg, South Africa. It is a non-technical look at stuttering and its treatment from the viewpoint of Dr Martin Schwartz, who has identified stress-sensitive vocal folds as the cause of stuttering. This approach has helped me a lot and has, so I believe, shed important new light on this neglected communication disorder. As the book is no longer in print I have placed a somewhat updated version on this website in the hope that it will benefit others.